The story of the Sisters of Notre Dame de Namur begins with two French women from very different backgrounds: Julie and Françoise. 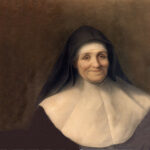 Born in 1751 in Cuvilly, France, Julie Billiart was the sixth child of poor shopkeepers. Known for her keen interest in spiritual things, by age seven she had not only memorized the entire catechism but understood it.

She delighted in the Gospel stories and in learning about God. As a teenager, she helped her family survive a financial crisis. She made linens, worked in the fields and sold goods for her father. When not working she could be found teaching children and fellow workers about the things of God.

Life dramatically changed for Julie at age 22 when she lost the use of her legs. Accounts vary as to why she was stricken. Some claim a fever epidemic coupled with much bloodletting was the culprit. Others claim that the loud report from a pistol shot into the Billiart house shocked the sensitive girl into this condition. Other known factors included her poor diet and physical hardships. Perhaps it was a combination of all of these factors.

With her body failing her, she turned to God as the source for her comfort and spent hours in prayer and meditation daily. Many came to her for counsel and comfort, including Françoise Blin de Bourdon, an aristocrat's daughter. Initially repulsed by Julie's invalid condition, Françoise continued to visit and later grew very fond of the woman with the "deep and lively faith."

Start of the French Revolution

The villagers had need of comfort and counsel as France had entered a period of political and social upheaval noted for its violence. The French Revolution saw the imprisonment and beheading of aristocrats and many of those in religious life. Churches closed. Schools closed. Life was difficult for peasants, religious and aristocrats alike. Julie's life was repeatedly threatened, in part it is believed due to her well-known holiness. Finally she went into hiding, one time escaping those who sought her life by hiding overnight under a heavy load of hay. An imprisoned Françoise, scheduled for beheading, was saved when the mastermind behind the revolution, Robespierre, was himself executed.

In 1804 churches reopened and the message of the Gospel could once again be preached. In June of that same year, Julie was healed from the paralysis that had plagued her for 22 years. Finally she could walk again. In the remaining years of her life she would travel incredible distances, often by foot, to set up new convents, visit Sisters and take care of business matters.

In October 1805, Julie and Françoise professed vows of poverty, chastity, and obedience as Sisters of Notre Dame. For Françoise this meant closing the door to her former life of privilege. Many in her family couldn't understand how she could choose this path. Hadn't she enjoyed the fine clothes and parties, been introduced at the court of Napoleon and Marie Antoinette and been courted by many eligible suitors? But Françoise considered the trappings of her former life as dross, and was ready to commit her life solely to God and his service.

Many at this time saw a whole generation of children growing up unschooled, undisciplined and unchurched. Wild and ignorant, the children knew nothing of God's salvation or goodness. Julie and Françoise intended to change that. Though Françoise eschewed material goods for herself, her inheritance funded the opening of a free school for poor girls. Later she and Julie would open day schools for wealthy girls using the money received from these schools to offset the cost of the free schools.

Their work with the children, including some orphans, was a great success and they attracted many young women to join them. Eventually the bishop of Amiens wanted Julie and her community to serve only in his diocese, but Julie did not feel this was God's calling for her. When she wouldn't agree to this command, the bishop expelled her from his diocese.

Saddened by this turn of events, but believing that to leave Amiens was for the best, Julie and Françoise along with many of the Sisters, relocated the congregation to Namur, France, which is now part of Belgium. There they were able to work as God was leading them with the full support of the local bishop.

In 1816, after several months of sickness, Julie died peacefully while praying in the presence of Françoise and the Sisters of the Namur community.

Heading to the New World

From the city of Namur, first part of France and later Belgium, the congregation expanded. The first request to go across the ocean came after St. Julie's death when Bishop Purcell requested Sisters of Notre Dame to go to his diocese in Ohio. In 1840 Belgian Sisters came to Cincinnati. In 1849, three Sisters of Notre Dame travelled from Cincinnati, Ohio by rail and coach to Boston, Massachusetts to take over the church school at St. Mary's in the North End of Boston.

In 1843 Father De Smet, a Jesuit missionary, requested Sisters to help in his mission in Oregon, and in 1851 Sisters began to serve in California.

Today the Congregation of the Sisters of Notre Dame de Namur now numbers over 1000 serving "the good God" in 16 countries on five continents. The Sisters continue the mission of proclaiming God's goodness and educating for life as did Julie and Françoise.