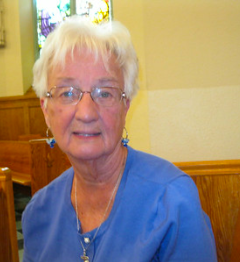 Sister Maureen Lewis, SNDdeN (formerly Sister Robert Marie) was born in Boston, Mass. The daughter of Robert Emmett Lewis and Marie Barry Lewis, she grew up in East Boston where she met the Sisters of Notre Dame de Namur at Fitton High School

She also served as a Director of Religious Education at St. Rita Parish, Hamden, Conn. and in the Notre Dame Development Office in Lowell, Mass. After working as a counselor in the Central Medical Unit in New Haven, Conn, she ministered as Co-Coordinator of the Associates of Notre Dame de Namur in Windsor, Conn. She also volunteered at Hospice St. Joseph in Port au Prince, Haiti for three years.

She is survived by her brother Emmett Lewis and her sister Sandra Murphy as well as her sisters in community and her many friends.

Sister Maureen decided to donate her body to science, and asked that those attending her funeral should plan to plan to come in BRIGHT Resurrection clothes to celebrate her homecoming!

A Mass of the Resurrection was celebrated for Sister Maureen on Monday, February 15, 2021 at St. Mary Church in Shrewsbury, Mass. at 1:30 PM.

If you would like to make a gift to the Sisters in Sister Maureen's memory, please click here. Or to make a donation by check or phone, click here.