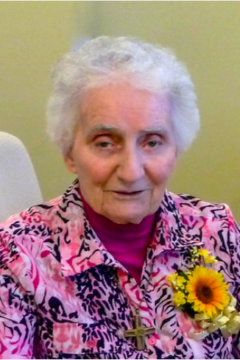 Sister Margaret Lynch died on April 22, 2020, at the age of 97. She was a Sister of Notre Dame de Namur for 75 years, having entered the congregation in 1945. Her religious name was Mary Kevin.

She was born in Fahaduff, Castleisland, CO. Kerry, Ireland, daughter of James and Hanna (McCarty) Lynch, and her family immigrated to Boston in 1930. She was a 1941 graduate of St. Patrick's High School in Boston. 1945 graduate of Emmanuel College with a concentration in English and Latin. She later earned a master's degree in French from Assumption College.

Sister later found a new focus for her ministry as a spiritual director, and spent several years leading retreats in the Diocese of Springfield and at Jesuit retreat houses. She lived in Worcester for many years.

Sister Margaret leaves a brother James Lynch of Marshfield, many nephews and nieces in the United States and Ireland, and her religious family, the Sisters of Notre Dame de Namur. She was predeceased by a sister, Mary Lynch of Framingham, and three brothers, Donal, Sean and Finn Lynch in Ireland.

Sr. Virginia Sheehan, SNDdeN reflected on Sr. Margaret's life, saying "Margaret (Peg) Lynch, SNDdeN, was a woman for all seasons. She savored her deep love for Celtic beauty and her Irish ancestry. She was into "care of creation" long before it was a Chapter priority. After her successful ministries as teacher and principal, she brought her gentle, quiet spirit, Irish wit and deep spirituality to postulants and novices in Ipswich, MA. As a competent and wise spiritual director and retreat minister, Margaret, was in demand at Campion Spiritual Center in Weston, MA and the Center for Spiritual Direction in Springfield, MA. She dedicated her summers to retreat houses along the East Coast: Eastern Point Retreat House in Gloucester, MA, Genesis Retreat House in Westfield, MA, etc. Margaret's retreatants and directees found her the essence of confidentiality. She was truly a Valiant Woman."

To make a memorial contribution to the Sisters in Sr. Margaret's name. please click here.