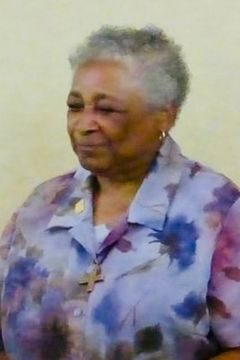 Sister Josita Colbert is a lifelong educator, champion for vocations outreach and a person who has spent her entire life working for justice and equality for the Black Community and People of Color. She has been a member of several Civil Rights groups throughout her ministry is on the boards of several organizations including the National Black Sisters' Conference, the National Religious Vocations Conference and the Center for the Advancement of Religious Life.

She currently serves as a Support Coordinator for the Mid-Atlantic Region of the East-West Province. "I feel privileged to walk with sisters in the Mid-Atlantic in this ministry. It is truly a joy to be of service to sisters in all kinds of moments, the basic as well as the most profound."

Born and raised in Baltimore, Josita's passion for justice and equality stems from the nurturing of her family. It was they who influenced her to collaborate with others who would further advance and internalize the Nguza Saba as it relates to quality education, the celebration and respect of diversity and seeing diversity as God's hand in it all.

The death of her mother was painful for Josita who faced this loss when she was thirteen. Yet, the love of family surrounded her. "We had a family meeting and the elders asked my opinion about what I wanted to do and where I wanted to live. I chose to live with my Aunt Blanche and family in Baltimore. Two of my aunt's grandsons still live in the area. I come from a military family. We all remain close, which is a blessing."

Josita attended a Catholic School for Black girls which was sponsored by the Oblate Sisters of Providence, a Black Catholic religious community. After her high school graduation, Josita entered the Oblate Sisters of the Providence. She received her undergraduate degree from Carlow College and her graduate degree from Antioch University. As a young sister, Josita was impressed with the Book of Esther. "I was inspired by her willingness to strip herself of all that would be of distraction in speaking and acting for the liberation of her people, regardless of the cost. I realized that as a Black Religious Women in the early 50's, I too, had to be bold, courageous and certainly prayerful to confront the sin of racism as one who believed in the Goodness of God."

In 1968, Josita was a founding member of the National Black Sisters' Conference. It was through her membership in NBSC that she met several Sisters of Notre Dame de Namur, who were also founding members. "I remember talking with Sister Dolores Harrell about Julie and the SNDdeN mission," she said. "I began a period of discernment and feeling called, I transferred to the Sisters of Notre Dame de Namur in Connecticut the early 1980's. I continued my work in civil rights advocacy.

Later, I taught at Kolbe Catholic High School in Bridgeport, where I also developed an after-school program for students preparing for college admission and for those eho wanted the extra help. I was fortunate to have several engineers and a lawyer intern assist me in this endeavor. It was a very fulfilling time.

In 2012, Josita returned to Baltimore to serve as a member of the SNDdeN National Vocations Team before beginning
her current ministry in 2014. She is a member of several external organizations and several internal SNDdeN committees. "I am grateful to the good God for the gift of my vocation, my family,religious sisters and friends. Life is good and God is indeed good."