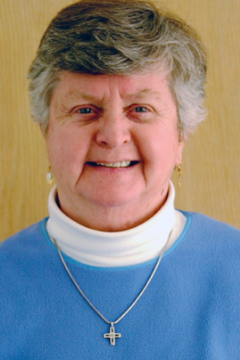 Sr. Jeanne was born in Somerville, MA on July 2, 1936, the daughter of the late Mary Jane (Rogers) and Frank MacDonald, and was predeceased by her sister Catherine Lombardi, and her brothers Roger and Alan Clark. She is survived by her beloved brother Frederick Clark of Belmont and her Sister-in-law Agnes Clark of Arizona as well as many nieces, nephews, grandnieces/nephews and cousins.

A celebration of Sr. Jeanne's life was held at Our Lady Queen Chapel, Ipswich, MA on February 20 with a visitation at 1:00 p.m., a Prayer Service at 2:00 p.m., and her Funeral Mass at 3:00 p.m., followed by burial at Notre Dame Cemetery, Ipswich.

Reflection of the life of Sr. Jeanne MacDonald

We are not here on this earth to save our souls, but to discover our souls. The way we come to know ourselves… to discover who we are and whose we are is in and through relationship.

Marguerite MacDonald, better known to her family as Margie, began to discover herself at 154 Pearl Street, Cambridge, MA. She would learn life lessons at an early age and discover the gifts that a family gives through the tender relationships of her mom Jenny, her aunt Foo Foo and Uncle Vincent her brothers Fred, Roger, Al and her sister Catherine as well as her aunts, uncles and cousins.

She went to Blessed Sacrament Grammar School, just down the street from her home. During those years, Sister Margaret of the Angels had a deep and lasting influence on the young, shy, skinny little girl. It was Sr. Margaret's belief in Margie that helped her to believe in herself.

As the family grew, it would include Sisters-in-Law Agnes and Steph and the many nieces, nephews and grands… and her dear Brother-in –Law Mike. All played a part in Margie discovering her soul.

She entered Notre Dame after high school and soon would be known as Sister Jeanne Francis. During those early formative years, she would discover, in and through her many encounters, more and more of who she was and whose she was.

Math, her major in college… became a language that she spoke with fluency, transparency and passion to students in classrooms throughout the years. "Math", she would often say, "is the language of creation!" Her missions to St. Mary's H.S., Cambridge, Bp. Fenwick H.S., Peabody; St. Mary's, Lynn; Odwin (Opening Doors Wider in Nursing) Learning Center, Summers in the PACE program for our Sisters in Nigeria & NDEC (Notre Dame Educational Center) caused the students whose oft heard refrain was: "I can't do math" gradually grow into "yes I can!" It was her way of being with the students that helped them to discover more of themselves.

Much like her patron saint, Francis of Assisi, Jeanne's relationships extended to all of creation. She loved nature in all of its seasons…remarking often, how the bare trees in winter held their own grace and beauty. She was also a dog lover and over the years she had three beautiful beagles Honey… followed by Sunshine… and last, but not least, Jenny.

As her journey unfolded, Jeanne was asked take on the role of Treasurer for the Boston Province and did so with grace, compassion, and care…a time when she would discover more of her soul in serving the Sisters of the province.

Over time, the loss of her family members, especially her sister Ca and her dear friends Sister Mary Christine McCarthy and Cindy Boyle, cost her not less than everything and gave her a profound sense of compassion for others in their time of loss.

In 2008, she was stunned by the support she received to be a delegate from the then Boston Province to the General Chapter of 2008. At that chapter, as delegates, each of us was invited to engage our imagination and write a letter as if it were from our foundress, St. Julie. In the letter, Julie offered her words of wisdom and her thoughts on how we might prepare our minds and hearts as we engage one another in addressing what would become known as the Calls to our Sisters throughout the congregation for the next 6 years.

The letter Jeanne imagined St. Julie writing to her follows:

Your letter gave me great hope and touched my heart because of your sisterly love and enthusiasm. You have expressed great concern for the needs of your Sisters and their mission, and ask my advice.

After prayer and reflection, the good God is drawing me to lead you in this way.

Listen and respond to the call of the poor, who also may be your very Sisters, by finding new, creative ways of sharing personnel and finances.

Respect all God's creation and respond only after hearing the needs of others and allowing them to be part of the solution.

Above all, be a woman of prayer and deep belief that the good God will always be at your side.

I must stop now – the Bishop is waiting!

This letter was a prelude to what would happen as the Chapter progressed and Jeanne left herself open to be elected to the Congregational Leadership Team… To her disbelief, she was elected. From 2008 to 2014 she would discover more and more of herself. During those years, she delighted in meeting and engaging with the Sisters throughout the congregation. She offered her support and understanding in times that were challenging… As Julie suggested in her letter, she did respect all God's creation and responded only after hearing the needs of others and inviting them to be part of the solution.

She offered her humor and light grasp on life as needed. The members of the CLT Liliane, Nancy, Maria, Teresita and Jeanne gifted one another and they gifted the congregation during their time of leadership.

Perhaps for me, the most significant time has been these last 6 months while Jeanne was here at Ipswich… her doing gave way to being as she was stripped of almost everything… She called this time her last mission!

And she took it seriously! A time of discovering more of who she was and whose she was…Prayer became ever more meaningful and God ever more real.

Her door was always open. Those of you who came, experienced her in ways that are hard to describe…her welcome and interest and laughter were contagious. One day her primary care doctor, Dr. Shapiro, called to see how she was doing. Toward the end of their conversation Jeanne said "I am praying for you Doctor… God bless you." In turn, the doctor asked if she could offer Jeanne a blessing … She then spoke in Hebrew "May the Lord bless you and keep you…May the Lord let His face shine upon you, May the Lord look upon you kindly and give you His peace."

During one visit, Patrick Boyle's little daughter Hannah came into the room with her stuffed elephant under her arm. When she saw the stuffed dog by Jeanne's side she was so taken with it that Jeanne gave it to her. On the way out the little girl with the dog under one arm and the elephant under the other, turned, came back and handed over her elephant saying, "This is for you!"

A sincere thank you to the nurses, aides and housekeeping staff, hospice care… for the untold ways in which you ministered to Jeanne… She was deeply grateful to you for all that you did to make her comfortable.

To her family, her Sisters here at Ipswich who journeyed with her these past six months; to all of her Sisters throughout the Congregation; to all of her colleagues and friends over the years, I know she would want to thank you for the ways in which you helped her discover her soul.

Perhaps we might take a moment to remember the ways in which Jeanne…Margie…has helped each of us to discover more of our soul….

Jeanne's mum used to say to her, "You, young lady, will sit up in your coffin to have the last word!"

I believe her last words would be those of our foundresses, Julie and Francoise, "How good is the good God!"

To make a memorial contribution to the Sisters in Sr. Jeanne's name. please click here.