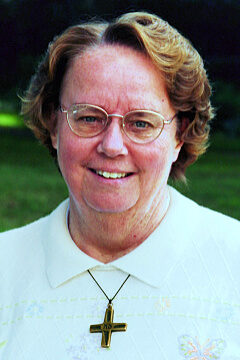 "How Good is the Good God!"
-St. Julie Billiart

Sister Janice was born in Newton, Massachusetts in 1943, joining her older sister, Joan. In her early years her mother worked in a factory and her father was a truck driver so she spent a great deal of time with her paternal grandparents. She credits her grandmother for teaching her 'math facts' as they spent hours playing Parcheesi. They also spent time each evening praying the Rosary with then-Archbishop Cushing.

She first met the Sisters of Notre Dame de Namur at St. Bernard School in West Newton, Massachusetts, where she was taught by Sister Mary Timothy in the first grade. As time went on her "Auntie Alice" entered with the Sisters and forged another connection. Visits to Newton Street, Waltham and other SNDdeN convents soon followed.

Sister Janice first thought about entering Religious Life when she was a sophomore in high school. After graduating from St. Bernard's she entered the Novitiate in Waltham, Mass. in 1961. In July of 1962 she, along with the Postulants, other Novices and Professed moved to the new Novitiate in Ipswich. It was there that she pronounced her first vows in 1964.

After spending two and half years in the Juniorate at Wenham, Sister began her teaching ministry at Our Lady of the Angels school in Worcester, Massachusetts where she taught seventh and eighth graders. Her most vivid memory of her first mission is being terrified to appear in public—her classroom—wearing the newly adopted 'modified' habit—legs and hair showing!!

Sister's first four missions all revolved around teaching in the science field. Her mission to Hudson Catholic High School (HCH) was a highlight. HCH was a small school in a small town where school was the focus of life—academic as well as social. Students were very involved in school and its many activities.

The 70s and 80s were times of transition and Sister transitioned from the classroom to the Guidance Office and eventually back into the classroom as a student. What stands out from those years was ministering in the Diocesan Schools Office in Springfield, Massachusetts. In that capacity Sister had the opportunity to work with and meet so many Sisters from different religious communities and to realize that there are really so many common characteristics!

Sister Janice is grateful to the Congregation for the many opportunities she has received. She is grateful to be an SNDdeN and to be a part of something larger than her world. After surviving double bypass surgery and stent placement in December 2020, she is just grateful to be alive! She lives by St. Julie's motto," How good is the Good God!" Sometimes hearing it as a question and sometimes repeating it as an exclamation!