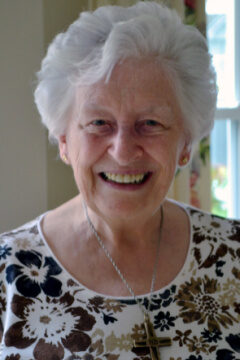 Harriet Cutting was born and raised in Waltham, Mass. She was the youngest of five children, but because her sibling closest in age was sixteen years older than she, Harriet found herself mostly among adults. She never attended Catholic schools, but met the Sisters of Notre Dame in her weekly catechism classes. After high school, she earned a degree and credential at State Teachers College at Framingham and began her teaching career in the Springfield Public School System in 1956. She enjoyed her teaching years and in 1961 decided to enter the Sisters of Notre Dame de Namur. She continued to teach and had many memorable experiences, both challenging and enjoyable. She also earned a Master's Degree in Education at the University of Connecticut. She was glad to be an SNDdeN.

After earning another Masters' degree, this time in Pastoral Ministry, Sister Harriet moved to Salem, New Hampshire and accepted a position as Director of Religious Education. This, she feels, was her life's work. Because of her own history as a public school student who attended religion classes on weekends, she understood what children and teenagers needed in their religious education. One summer, she and Sister Catherine O'Brien spent eight weeks doing a Practicum on "Family Religious Education" with two wonderful mentors in Alexandria, Virginia. This was a real breakthrough for Harriet; the incorporation of parents with their young students. Harriet brought this program back with her to her parish in New Hampshire and it caught on. Religious Education classes moved from the parish into individual homes, with participation of parents and their children. They all became learners in a totally new environment which led to new ways of learning.

Harriet continued in this rewarding work in New Hampshire from 1975 until she officially retired in 2011. She then became involved in various volunteer ministries, each of which she enjoyed.

When celebrating her 60th Jubilee, Sister Harriet expressed gratitude for so many things. Her life has been transformative.

She's grateful for the variety of experiences she's had:

She's grateful for her full recovery from a serious case of Covid 19, which she contracted in March of 2020.