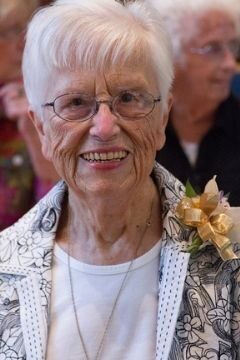 Sister Elizabeth Michaels was born Jeannette L. Michaels in Brighton, Mass. to parents Fred and Elizabeth Theis Michaels. After graduating from Boston Latin School, she received a scholarship to Emmanuel College from Marie Glennon, a teacher at Boston Latin School who was one of the first graduates at Emmanuel. Marie paid the tuition of many intelligent young women from Boston so they could attend Emmanuel; several became Sisters and at least three of them later became professors at Emmanuel—Elizabeth among them. She earned her B.A. degree in mathematics from Emmanuel in 1946, and that same year entered the Sisters of Notre Dame de Namur, taking the name Sister Elizabeth Louise.

Sister Elizabeth received her M.A. in Mathematics from Boston University and a Ph.D. in Mathematics from the University of Notre Dame. She served on the Emmanuel College faculty for forty years, where she played a key role in developing programs in mathematics and also in curriculum innovation across the College. During her teaching years at Emmanuel, she shared, "My ministry of education at Emmaneul College has involved working with the growing number of minorities and 'new immigrants' and also women in the continuing education department." At Emmanuel College's Commencement in 2019, she received an honorary doctoral degree in recognition of her role in preparing decades of Emmanuel students for lives of leadership and service.

Knowledgeable, talented, and articulate, Sister Elizabeth also served in Province leadership. Among her other responsibilities she was a member of the Notre Dame Academy, Hingham Board and Corporation when they constructed a new building.

From 1975-84 she served as a member of the General Government Team. One of her most challenging projects during this time was facilitating the move of congregational finances from Rome to the U.S., navigating Italian, Vatican, and American protocol all along the way. She is known for her hearty laugh and good sense of humor, both of which were undoubtedly evident during this endeavor.

As she entered into her retirement years, Elizabeth used her experience in education and administration to advise the Sisters in newer educational ministries, especially those committed to serving people on the margins of society. Her numerous contributions to Glimpses of God's Goodness, weekly Gospel reflections (available on the SNDdeN.org website), have been especially appreciated. Now in residence at Notre Dame Long Term Care Center in Worcester, Mass., Sister Elizabeth continues her dedication to mission through her ministry of prayer.

Some words from Wendell Berry are meaningful for Elizabeth and describe her attitude about life:

"…Now more than ever you can be
generous toward each day
that comes…."

In 2021, Sister Elizabeth celebrated her 100th birthday and her 75th Jubilee as a Sister of Notre Dame de Namur!