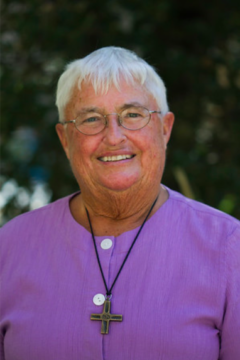 She entered the Sisters in 1979 and professed her perpetual vows in 1986. Sister Edie's legacy of service began as Coordinator of the Youth Ministry programs at St. Eulalia's Parish in Winchester and then at Immaculate Conception Parish in Marlborough. At Cardinal Cushing High School in South Boston, she taught Christian Studies, was Director of the Planning Center, and served as Principal from 1990 to 1992. She then became Dean of Students at Emmanuel College from 1992 to 1996.

Next she served as Director of Campus Ministry at Notre Dame College in New Hampshire. Later in her career her focus shifted toward helping her community of Sisters in the Formation ministry regionally, and then as a part of the United States Notre Dame Formation team. She was a part of U.S. East-West  Province Leadership team until last year. She also served on the Board of Directors of Notre Dame Academy in Hingham.

To make a gift to the Sisters in memory of Sister Edie, please click here or write to the Sisters of Notre Dame de Namur, 351 Broadway, Everett, MA 02149.