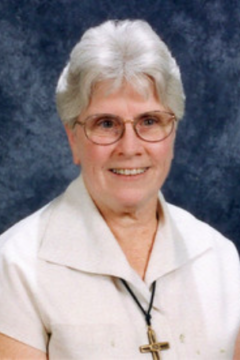 'Talk much to our Lord in peace and calm."
-St Julie Billiart

I grew up in East Boston, which used to be called Noodle's Island before my time. It was surrounded by the Atlantic Ocean–our own swimming hole!—and the Chelsea Creek, which was a docking place for oil tankers. My parents were first generation Irish of Galway and Donegal heritage. I had an older brother John/Jack and a younger brother James/Jim and an older sister Anne Marie. Music was definitely an important part of our life and we all had piano lessons.

I entered the Sisters of Notre Dame de Namur on August 1, 1951 at Waltham, Massachusetts. In answer to the question, "Why did I enter Notre Dame?"—especially when I had three relatives with the Sisters of Mercy—the answer is that I felt that Notre Dame asked for a greater sacrifice as well as an opportunity for foreign missionary work. And I admired my teachers and recognized their desire to teach us.

My first mission was to be a third grade teacher at St. Michael School in Exeter, New Hampshire in 1954, and one of the best memories is of Sister Elizabeth O'Connor, who took me under her wings and became my mentor. She gave me a love for teaching. Sister Elizabeth is still very much alive and well and faithful at more than 100 years of age.

Basically, my ministry has involved education—teaching and administration—in four Dioceses (Manchester, Springfield, Fall River, and Boston, Mass.). I usually taught in the fields of chemistry and mathematics.. I have experience on all levels—primary, secondary and college—and I enjoyed every minute of teaching. I endorsed Aristotle's thought that the fate of empires depended on the education of youth.

I'm grateful for the education provided by Notre Dame, at Emmanuel College, Boston, graduate study at University of New Hampshire, and doctoral study at the University of Massachusetts at Amherst.

It was understood in the Province at the time. that after completing  Bachelor's and Master's degrees, each Sister would give some service to the Province during the summer months. There were several opportunities available at the time, and one was working at the "Lake" in Worcester. Mass., which was our Retirement/Nursing Home at the time.

For the next 20 summers I spent time working at "The Lake" caring for our Sisters. These were very special summers; it was a way of paying back/being grateful for the Sisters' sacrifice that provided so much for me.